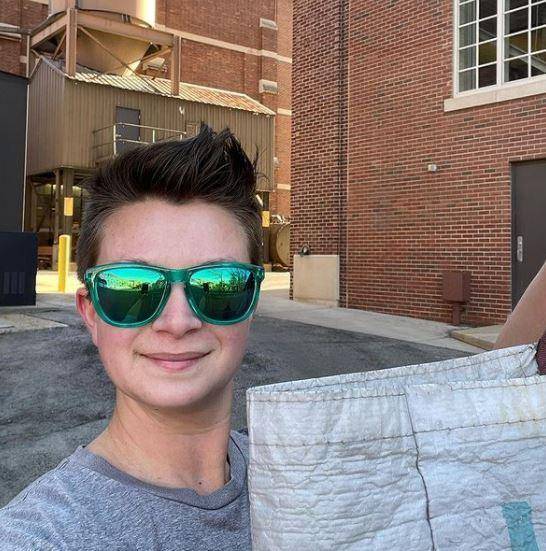 Every day is Earth Day and “Run Streak Day” for Sweater Crew member Ashley Hughes @ashleyrunsdaily. Ashley has run at least one mile every day for the past 1386 days. (That’s 3 years, 9 months, and 21 days!) In addition to her impressive daily run streak, Ashley has picked up a “trash streak” for the past 244 days, picking up at least one pound of trash during each of her daily runs. What started out as a Forest Gump-esque “I-just-felt-like-running" moment has evolved into a full-blown micro-movement within her community. And it’s being noticed, too – fellow community members started to pick up trash, and she was recently awarded the “citizen of the year” plaque from her local community for her leadership!

For Earth Week, we caught up with Ashley to learn more about her streaks, inspiration, and cool finds. Every mile, piece of trash, and good deed adds up, and we’re inspired by people like Ashley!

SS: Tell us a bit about your story. What’s your background and what got you into the sport?

Ashley: I originally began running in high school with cross country. Wasn’t ever spectacular, actually, I usually finished close to last. I ended up with a stress fracture from ignoring shin splints and didn’t really run too much after that for a good 3-4 years. After that, I ran occasionally, sometimes 3-4 days a week , until living in Hawaii. There, I found a running club for active duty spouses called Stroller Warriors and began running more regularly.

SS: Tell us a bit about your streaks. What motivated you to start running and picking up trash every day?

Ashley: In July of 2017, Stroller Warriors did a streaking challenge that I decided to do just to see if I could. That was around the time my husband had his first back surgery and was looking at medical retirement from the Navy from his injury. So, I guess in a way it started and continues for him as well, since running isn’t in the cards for him. Then, not quite a year ago, I came across another streaker on Instagram who started picking up trash on her runs, and after watching her I decided I could do that too. I was running the miles anyways, might as well do some good was my thought. SS: How much do you run per day? Is there a minimum run requirement?

Ashley: My minimum run to continue the streak is a mile.  I currently have a five-mile streak going since May 1, 2020. I’m feeling a little burnt out on that one though, so after I hit a year, I may decide to drop that off. I’m just taking that one day at a time.

SS: What about trash streak – are there any requirements there?

Ashley: For trash miles I usually run until I fill my bag... might be half a mile, might be three. If it’s less than a mile though, I run to a mile.

SS: How do you get out there on the tougher days? Weather/work/life challenges?

Ashley: I wish I had some sort of super motivational reason or way to make myself get up and go every day, but I just don’t. I guess I’m just too stubborn to quit at this point unless I come across a legitimate good reason. I just know I need at least 10 minutes a day. I tell myself I can do anything for 10 minutes. Even if it’s 11:50p. Although, on the day my husband was admitted to the hospital, running was the last thing on my mind and had it not been for him practically begging me to, everything would have ended that day and I’d have been completely fine with that. I’d probably even have started again by now.

SS: What are some of the more common things you’ve found during your daily trash run?

Ashley: I’ve found so many crazy things. So many discarded beer/alcohol cans and bottles along the side of the road, which is really sad. Lots of cigarette packs, single use water bottles and soda bottles. Single use plastic bags are always flying around, and so are masks lately. I have quite a few places that frequently have the same trash thrown down again and again. I also find so many plastic straws. It’s more time consuming to stop and grab small things like that, but I feel like it’s important because eventually (almost) everything ends up in the ocean and it breaks my heart to think of honu (sea turtles) with straws stuck in their noses.

SS: What’s the heaviest thing you’ve found and picked up during a run?

Ashley: I think the tire has been the heaviest thing I’ve made myself drag home. It was miserable, and I don’t know that I’d be super excited to do it again. I also had a super heavy bag the day I found nearly 100 beer cans. That was another slow, rough, shuffle/jog “are-we-there-yet?” few miles. I’d still like to try to collect 100 beer cans on one run. SS: What do people think when they see you doing this? Has anyone joined you?

Ashley: I have no idea what people think of me, honestly, I assume they think I’m a little crazy, but I’m ok with it. I’ve had a good bit of cheers and honks now and again, and sometimes people walking will say thank you or something. In my smaller town, a few cops noticed me around the end of the year, and actually took up donations and bought me a pair of shoes and various gift cards. They also had a citizen of the year plaque made and everything. That was really neat, to see that more people than I’d have thought noticed me and appreciated it. And truthfully, since then, I’ve seen a few others out and noticed the street department out picking up trash a few times. Every little bit counts.

Ashley: I’m actually quite far off both goals right now, but I think I can still pull it off. Year-to-date I’m at 533 miles and 323lbs of trash. Yikes. I expect to get out for more miles as the weather is nicer and life has settled a bit for me personally though. Summer running is my favorite and I hope to be able to make up a lot of ground on both goals in June and July.

Ashley: Lemon-Lime Fastchews are my all-time absolute favorite, followed closely by Orange. They remind me of sweettarts and I could eat them any time of day!

SS:  How does SaltStick fit into your routine?

Ashley: Saltstick works for me because I generally like to run on a pretty empty stomach to avoid heartburn and nausea, so it gets me through where water doesn’t always get it done. Ashley: I think the only thing I’d share is to not underestimate yourself. I never thought that this is what running would be to me, but now, I sincerely love it. Some days are a chore, yes, but it’s always worth it. I always feel better after just a mile. It’s not always easy, or sunshine and rainbows, but even when I have to make myself do the first mile, I want to run further more times than not. And, do something for the earth and your town if and when you can. It doesn’t have to be every run or walk, just once a week would make a difference. If you were to actually pay attention to the trash that’s (likely) everywhere, I bet you’d be surprised. Parking lots are especially bad. The next time you’re walking into Target or the grocery store, look and count and I’d bet you can find 10 pieces of trash easy. Every piece picked up and every person who does a little, can add up to a whole lot!

Thank you, Ashley for leading by example! You’re making our planet cleaner, one piece at a time.